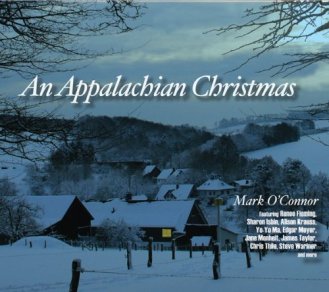 Every year, I search for a great new Christmas album to add to my collection. With more than 11,150 Christmas songs in my collection since I began in 1987, I’ve heard everything. Good and bad. When you find a holiday album that is simply perfect in every way, it’s a cause for celebration. This year, that perfect album is “An Appalachian Christmas.”

I was excited to find out that America’s greatest living violinist, Mark O’Connor, had self-produced and released a holiday collection. As a fan of his amazing talent (bluegrass, jazz, classical, folk) and output over the years (his work with Yo-Yo Ma, plus his score for “LIberty: The American Revolution” is simply outstanding), I couldn’t wait.

It doesn’t disappoint. Working in every genre and style, while keeping true to his “Appalachian” sound (he’s actually from Seattle), O’Connor’s Christmas collection is a true Christmas gem. From the opening jazz-influenced “The Christmas Song” with guest vocalist Jane Monheit, to “Jesu, Joy of Man’s Desiring” (originally released on Amy Grant’s “Home for Christmas” album), to the classically-inspired songs with soprano Renée Fleming, every song sets a tone of introspection and celebration that is hard to match.

Here’s O’Conner and Monheit’s rendition of “The Christmas Song,” which shows that this may not be the album the title makes you think it is.

Those looking for a strict bluegrass, vintage “Appalachia” album will be quite disappointed. The vocals lack twang. The “fiddle” sound comes and goes. It’s not “Appalachian” in style, but it is in substance: a celebration of home, tradition, warmth, goodness, and friends. Listening to the album almost feels like you were invited in to O’Connor’s home for a Christmas Eve party, with his friends from various walks of life all there, and they just started singing what came out of their hearts. It’s a beautiful, simple, and stunning album.

Standouts for me include his collaboration with Alison Krauss on the old “Slumber My Darling” by Stephen Foster, which now feels like a quiet lullaby between Mary and the baby Jesus. Krauss’ pure voice is matched by O’Connor’s gentle playing, and it’s a beauiful moment in an album full of them.

I also enjoyed James Taylor’s salute to an old dog–which really adds to that atmosphere of friends gathering together and singing from the heart. O’Connor’s rendition of his collaboration with Yo-Yo Ma, “Appalachia Waltz,” closes the album, reminding us once again that he is a master not only of style, but of substance.

Looking for a truly beautiful album you’ll play year after year? Look no further. This is a Christmas collection that stands next to the greats.