When a Bad Guy Tries to Be Good

Walt Disney Animation Studios’ new film Wreck-It-Ralph is easily their best film in awhile, and probably the best animated film of the year.  It’s funny, witty, full of adventure and heart.  It’s a tale of a bad guy who yearns to be good.

Well, maybe not good.  For 30 years, since the day his game was plugged in at the arcade, Ralph has been the bad guy.  Every time someone plays the game and wins, the hero gets a medal.  He gets glory and honor.  And pie.  And after 30 years, Ralph wishes for his piece of the pie.  And the glory and the honor.  He thinks what he needs is a medal, a chance to prove that even a bad guy can be a hero.

This sets the adventure of Wreck-It-Ralph on its course, and its a wonderland of video game references that kids (and their parents who played Pac-Man and Q*Bert back in the day) will thoroughly enjoy.  One of the brilliant conceits of the film is that after closing, the characters are free to leave their games and interact with each other.  In Game Central Station, they can cross over from one game to the next.  Here, viewers who watch closely will see obvious cameos from Sonic the Hedgehog and other easily recognizable game heroes, but they’ll also catch quick random references to old favorites.  Even Pong manages to make an appearance.

But Ralph doesn’t rely on pop-culture references for its humor or success.  The story is engaging because the characters are fully realized, dimensional heroes.  Ralph (voiced winningly by John C. Reilly) is a great hero, even though he doesn’t realize it.  When he leaves his game, his nemesis, the kind and affable Fix-It-Felix, Jr. (voiced by Jack McBrayer, who doesn’t stray to far from his familiar role as Kenneth on 30 Rock) goes looking for him.  Without Ralph or Felix, the game appears to be broken–and if the plug is pulled, the game’s characters become homeless, forced to beg on the streets.

Ralph’s quest for a medal takes him to contemporary Hero’s Duty, a game much in the mold of Halo, full of big armored men and villainous hordes of bugs.  Here he meets the tough as nails Sgt. Calhoun, a woman who “was programmed with the most tragic backstory in video game history.”  As played by Jane Lynch (channeling her regular character on Glee), she’s a tough cookie who doesn’t appreciate the havoc Ralph brings to her game.

Eventually the characters find themselves in the super sweet racer Sugar Rush, where Ralph meets Venelope VonSchweetz, who is played by Sarah Silverman (in easily her best role ever, and the only time I’ve ever actually enjoyed her performance).  A glitch in the game, she desires to be a racer and forms a pact with Ralph to beat the game, win him back his medal, and earn her place in the game’s hierarchy of characters.

It’s a pretty unusual and original story, far different from anything else from Disney recently.  It’s hip and contemporary without resorting to the cheapness of most DreamWorks’ products (I’m looking at you Madagascar 32, or whatever number they’re on right now), and it’s got the deep character development of most Pixar films.  Ralph and Venelope are so well created that you forget they are video game characters, let alone animated.  When the film’s big character crisis comes, you’ve grown to care so much for the pair that it’s a pretty powerful moment.

Like most of my favorite stories, it’s one where the main character sets out to discover who he is supposed to be.  Ralph thinks he can only be “good” if he’s a hero, but what he discovers is that he already has everything he needs to be a hero.  When he sets out to save Venelope in the film’s epic climax, he quotes the “Bad Guy Creed” he said with his fellow bad guys at the beginning.  This time, however, he says it in realization that who he is has no bearing on who he can be.

Wreck-It-Ralph is the best video game movie ever, and it has enough inside jokes and quotes from other games that anyone who has ever held a joystick or a controller will find lots of familiar and fun territory.  But it is also the rare movie that teenage gamers will enjoy as much as elementary age girls–and a cross-generational hit that is the best animated film of the year.

As a bonus, the short subject Paperman accompanies Ralph, and it’s easily as good as the main attraction.  Helmed by animator John Kahrs in his directorial debut, Paperman was created in black-and-white using “a groundbreaking technique that seamlessly merges computer-generated and hand-drawn animation.” 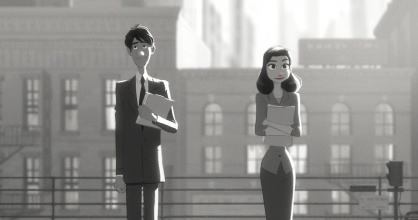 It’s a wordless film that heralds a breakthrough in the future of animation.  It’s seriously that good, that amazing.  It’s almost as groundbreaking as Steamboat Willie (first sound cartoon), Flowers and Trees (first Technicolor cartoon), Snow White and the Seven Dwarfs (first animated feature), or Toy Story (first computer-animated film).  Combining traditional character animation with computer animation will open up whole new worlds to the company whose name is synonymous with the art form. 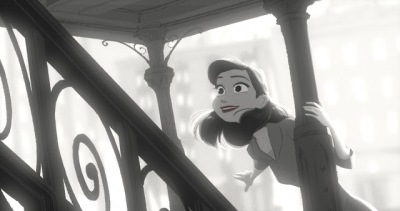 Paperman delighted the audience I was with tonight and cannot wait to see what Kahrs and Disney will do next.