I listened to the local Christmas music station for about 30 minutes today. Spaced apart by about 2 hours, I was annoyed by all the commercials and the way the DJ’s referred to themselves with holiday nicknames.  I was also bugged that in the 30 minutes I listened, I heard two of the same songs: Michael Buble’s “I’ll Be Home for Christmas” and Justin Bieber’s “Mistletoe.”

Bublé’s take on the 1940’s classic was nice.  It wasn’t remarkable, but it was well-sung and the arrangement was full of lush strings.  I guarantee that it will still be listened to 20 years from now.  It just sounds like a classic Christmas album.

I wish I could like Bieber’s song, but unlike “I’ll Be Home for Christmas,” it will not stand the test of time and be sung 40 years later.  The “imma be under the mistletoe” line dates the song to the current year–and it’s one of those phrases that makes lovers of fine lyrics cringe.

To create a new Christmas song isn’t easy.  To create a Christmas album that represents the time period in which it was created yet doesn’t sound dated is next to impossible.  But there is one album that stands head and shoulders above the rest as a shining example of a classic sound, fully exemplary of its time, yet strangely timeless. 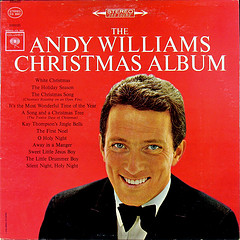 In my house, you know it’s Christmas when Andy’s bright smile shines from the corner of that bright red cover.

The album works because of the power of its arrangements, sheer amount of fun, a great reverence for the season, and of course, Andy’s voice.  It’s clearly an album from the early 1960’s, but the arrangements of Williams’ songs, by such legends as Johnny Mandel, George Wyle, Robert Mersey, and Marty Paitch, are so full of fun and joy that the songs themselves have become as synonymous with the season as trees and presents.

Like many albums of the era, created in the day when one had to flip a record over to hear both sides, one half is secular and the other is full of traditional carols.  The songs range from the standards “Whiite Christmas” and “The Christmas Song” to the pop jazz power of “Kay Thompson’s Jingle Bells,” which was written by Kay Thompson, the author of the Eloise books.

But the standout is George Wyle’s “It’s the Most Wonderful Time of the Year.”  It’s rare to write a song that becomes a standard–most of our contemporary standard Christmas songs range from the World War II era–but Wyle, who wrote the arrangements for Andy’s TV show, created a song that has become a  true classic.

Lyrically powerful and blessed with a wonderful melody, it’s Johnny Mandel’s arrangement, with the big blasting horns and great background vocals, that have made Andy’s version the standard.  In fact, the American Society of Composers and Performers certified his recording of the song as the #4 most-played Christmas recording of 2010, surpassing even Bing’s “White Christmas.”  For a song recorded in 1963, that’s quite the staying power–and a true testimony to the power of creating a new Christmas song–without making it sound dated.

Add in the album’s starting song, a medley of “Happy Holiday” and “The Holiday Season,” and his classic sing-along version of “The 12 Days” reinvented as “A Song and a Christmas Tree” (and featuring a guest bass performance by Thurl Ravenscroft, no stranger to Christmas as the singer of “You’re a Mean One, Mr. Grinch”), and you’ve got 15 minutes of sheer holiday perfection.

The second half of the album, where Andy sings his versions of songs like “Away in a Manger” and “Silent Night” suffers in comparison to the first half, which is just amazing.  But I must say that his version of “The First Noel” is one of my favorites, and nobody sings “Sweet Little Jesus Boy” with more tenderness and heart.  Andy’s voice truly shines on these quiet songs.

Put down Bieber’s “Misteltoe,” and pick up a true classic.  Get The Andy Williams Christmas Album and you’ll soon discover why it is “The Most Wonderful Time of the Year.”

And here’s Andy on “The First Noel,” a personal favorite.